The well-to-do bourgeoisie, or that which wants to pass for it, is always talking about it premium. Interesting. The people remain consistent dik to mention. Nice and short. But in fact the here and there somewhat hysterically adored class of the larger sedan has been around for a long time and this segment was also erroneously populated by purely Germanic dikbolides.

In the colorful eighties, Japanese cars did not have the status that they now enjoy. They were the Chinese of today and Japanese brands were often accused of shameless copying behavior and questionable quality standards. We could see that our own silly British Leylanders in the meantime flitted one after the other on wheels on wheels. We had our preferences and principles. Sounds noble, but in the case of this great Datsun that meant a missed opportunity.

Because the bulky Japanese really didn't have many disadvantages. Only that he was from Japan. And he rusted. At least that was the image, in reality everything that was made of steel fell and on wheels it was prey to this ancient autoimmune disease. Simply because the rust prevention was much less advanced at the time and it was generally accepted that a car started to rust after three years. It was no different, and even the renowned models got brown scabs over time. The decline also came under the hood much faster than today. Whereas nowadays things are just running smoothly at such a mileage and the dust is off, at that time a ton or more was a cause for concern and the hubby had to be laid down gradually in the week: a new one had to come. The thing was finished.

The Nissan Laurel of this fourth generation not yet. Especially the smooth six-cylinder had a lot of endurance, because they never had to show the back of their tongue. Such a six-in-line had eternal life and ensured a pleasant rest on board. Now we are cruising through the urban jungle with an incomprehensibly complicated machine with 237,5 possible resistance (among other things depending on body temperature and the current isobaric pattern), but at the time the testers were pleasantly surprised that the manual five-speed gearbox in the city was often in its four. The 2,4 liter and 113 hp offered strong L6 in the front. Moreover, without electronic ignition and with a simple, two-stage carburetor. But brought to life with an automatic choke. A vending machine was also available and actually suited the relaxed character of this laidback Nissan Laurel better.

Only six cylinders were available in our country: the aforementioned 2,4 liter gasoline version and an 2,8 liter diesel version, both exclusively in the luxury GSL version. And luxury was not a hollow phrase in this case. That predicate was in elegant chrome on many cars at the time and not always justified, but the Nissan Laurel was almost oblivious to the luxury on board: a radio cassette player, electrically adjustable mirrors, variable interval wipers, electric windows with quick-release for the driver, four headrests, a consumption indicator, height-adjustable seats and handlebars, digital clock and map reading lights. Because that was what they were then called. Such a paper monster sometimes had a passenger on his lap, upside down and in extremely intricately folded parts that would never again be that innocent and handy package. You indeed needed quite a bit of light. Meanwhile, the driver got lost hopelessly, but extremely comfortably.

That did not happen often, the Nissan Laurel was rarely the first choice in this class. Despite its smooth, yet professional lines, as it was described so beautifully in the test. Unknown made unloved, it was no different then. Here the roles were reversed and the fat one had the silly supporting role. Maybe he should have been called Hardy. 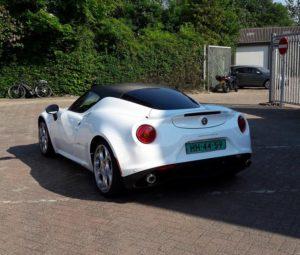 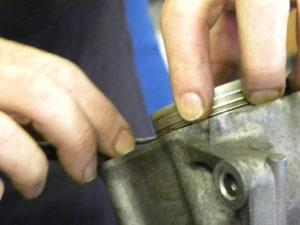 - Request a sample number
- This is in the current issue
- Register your classic
- Our options for companies
- inform about a change of address
- Are you organizing an event?
- Interesting events
- Vintage cars for sale
- Complete overview of oldtimers and youngtmers at AMK
Auto Motor Klassiek is a monthly issue about classic cars and motorbikes. With the most comprehensive section every month vintage cars for sale, all the news you can imagine and interesting articles about classic cars and motorcycles, practice and technology. Single issues cost € 5,99. A subscription costs only € 49,50 per year. Subscribers are almost € 23 cheaper per year. In addition, as a subscriber you can advertise for free (see conditions) and you have Auto Motor Klassiek almost a week earlier in the house.
This site is protected by reCAPTCHA and the Google and Terms of Service apply.