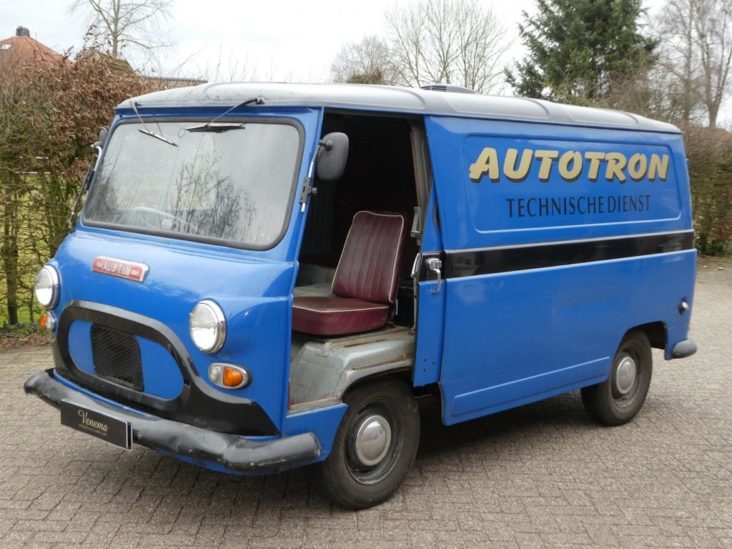 One blue classic… is not the other. We live in a time when people and companies want to distinguish themselves. And so we recently spoke to a young entrepreneur with a fantastic problem: He wanted a blue bus for his company. That vehicle had to function as an advertising object, say, as an attention grabber for his company. A classic bus seemed especially suitable for this. With the fact that the van had to be blue, he went looking. And he had ended up in English spheres. He was at peace with that. He had found two blue 'delivery men'. One at Garage de Vaal near the corner of Holland. The other was at Venema Classics in Drempt.

And do you want to know what his problem was?

He hesitated between an Austin J4 Commercial and a Rolls-Royce 20 HP Van. The good entrepreneur then had a plan. But not a single word of classic cars. So we will find him in something sensible. Something new. But we would like to share his choice stress with you.

That is a car with history. He has been saved from the autotron estate. He must have spent his last working days there. The Austin has dreamed for a while and requires attention. The engine is running and the front brakes do it anyway. There are a few places that require some attention. But he is downright endearing and worth saving. And affordable. Also for a young dynamic entrepreneur.

This Rolls-Royce Twenty (also called Rolls-Royce 20HP) is a very special car. To begin with, because it is a Rolls-Royce with a delivery van body, a so-called "Van". Secondly because of its special lettering that uniquely reinforces the classical character of the structure.

This Twenty has not always been a "Van".

In November 1925, Mrs Foreshew bought an enclosed limousine from coachbuilder Hooper. Hooper ordered the chassis with the engine at Rolls-Royce and received it in February 1926. The total car was ready in July 1926. It was apparently not immediately put into use, because in July 1927 the warranty only started.

The supplied history shows that the car was owned by C. Rowntree in November 1935, V. Garland in December 1937 and Dr. 1938 in November. AWJ Houghton.

Until the 70 years, it is not known exactly who owned the car when and when the Limousine coach was exactly replaced by a "Van" coach (in the book "Rolls-Royce Twenty" by John M. Fasal also called "Shooting referred to as "-brake" It can be concluded from history that in 1955 he was a "Van" in the color black / orange, which he may have had since 1927.

A few years after WWII the car was in Scotland

The delivery van served Hill & Co for almost 20 years, but in February 1996 it was resold to Dennis Noel Multon of Rumbling Bridge, Kinross, England. The latter disposed of the car almost two years later and in December 1997 it was acquired by Autocycle Engineering, Netherton, Dudley.

A few years after WWII the car was in Scotland

A few years after WWII the car was in Scotland. The car is accompanied by an extensive historical file from which it can be concluded that a lot of maintenance has been done. It also appears that the artillery wheels are the originally placed wheels. Technically, the car is fine. Engine and gearbox are well maintained and function properly. The carburetor has recently been completely overhauled. The paint has since become somewhat cracked due to the old age, but the lettering is still intact and tidy. Surprising for our entrepreneur: the price of this van was 'on request'.

Garage De Vaal reports: "This car is a beautiful advertising object". And that's what our troubled entrepreneur thought. He thought as a layman in the car field that cars as they got older only got cheaper.

And so you come to the riddle: "What is the difference between a blue bus? *" Well, in this case the price.

* Free to “What is the difference between a crocodile? "The answer to that question is" All the greener. all the time "