- Request a free trial number
- This is in the current issue
- Register your classic
- Our options for companies
- inform about a change of address
- Are you organizing an event?
- Interesting events
- Vintage cars for sale
- Complete overview of oldtimers and youngtmers at AMK 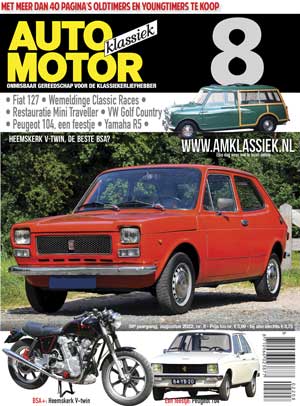 Auto Motor Klassiek is a monthly issue about classic cars and motorbikes. With the most comprehensive section every month vintage cars for sale, all the news you can imagine and interesting articles about classic cars and motorcycles, practice and technology. Single issues cost € 5.99. A subscription costs only € 44.95 per year. Subscribers are almost €27 cheaper per year. In addition, as a subscriber you can advertise for free (see conditions) and you have Auto Motor Klassiek almost a week earlier in the house.
This site is protected by reCAPTCHA and the Google Privacy Policy and Terms of Service apply.